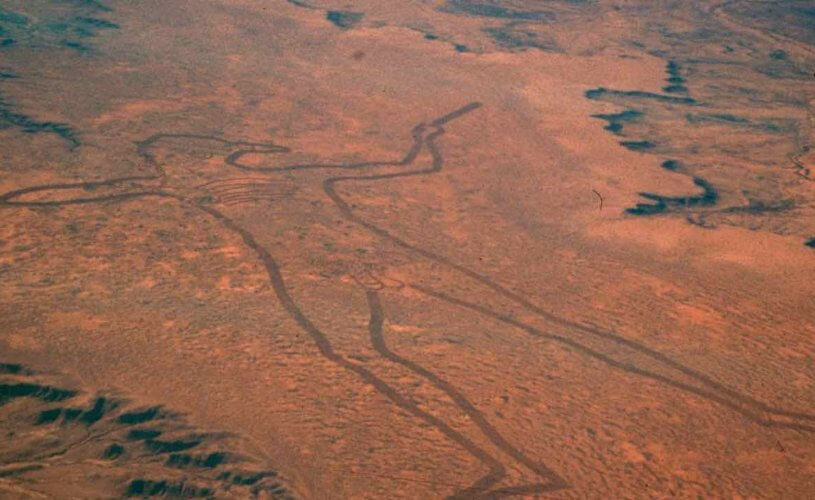 Did you know that Australia has it’s own mysterious geoglyph, on par with the Nazcar lines of Peru? The Marree man (so named due to its proximity to the town of Marree), is an engraving in the Australian desert of an indigenous figure of a man with a spear or boomerang. It’s 4.2km-long with a circumference of 28km. It’s so big, that it can only truely be seen from the air.

The Marree man mysteriously appeared suddenly in outback South Australia near Lake Eyre almost two decades ago. One day it wasn’t there, the next it was. Nobody knows who did it or how, although it hasn’t come from outer space – that is for sure.  Conjecture is that it was created by people from the United States or an Australian artist named Bardius Goldberg, but nobody has stepped forward to confirm.

Over the years it started to fade but has recently been restored to its former glory, making a scenic flight to see it, a valuable addition to any trip to outback South Australia. We’d recommend tacking it on as a day trip with a 3 or 4 night stay at Arkaba in the Flinders Ranges. Your pilot will also show you Lake Eyre and Wilpena Pound from above to give you a real sense of how spectacular Australia’s desert landscape can be.

Click here to begin your tailor-made journey to Australia