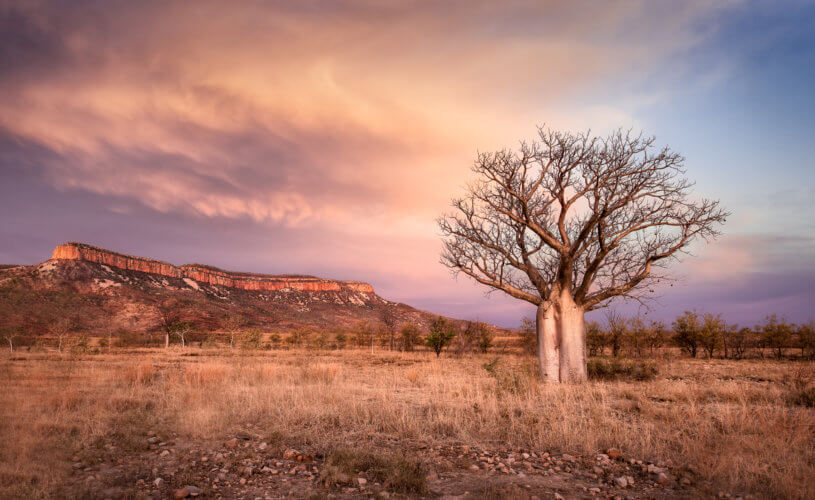 The iconic Gibb River Road is little more than a 660 km long bush track that links remote cattle stations to Derby and Kununurra. For the traveller, however, the Gibb River Road provides adventure and access to the virtually untouched natural beauty of the Kimberley wilderness.

It’s one of the country’s greatest 4WD adventures.

The best months to travel are from May to September as the road is often closed during the wet season, which is typically November through March.

Highlights of the Gibb River Road

Three hundred million years ago the Napier Range was part of an ancient barrier reef system and this whole area was under the ocean. More recently The Lennard River has carved out a 3.5 km gorge that is up to 100 metres deep. A 3.5 km walking trail winds its way through the monsoonal strip of vegetation along the permanent pools of water that remain.

The creek flows through a water worn tunnel beneath the limestone of the Napier Range, you can walk 750 metres through the tunnel to the other side of Napier Range, wading through several permanent pools and watching for bats and the stalactites that descend from the roof in many places. Freshwater crocodiles are occasionally found in the pools. You may see goannas, wallabies, bats, herons and owls. 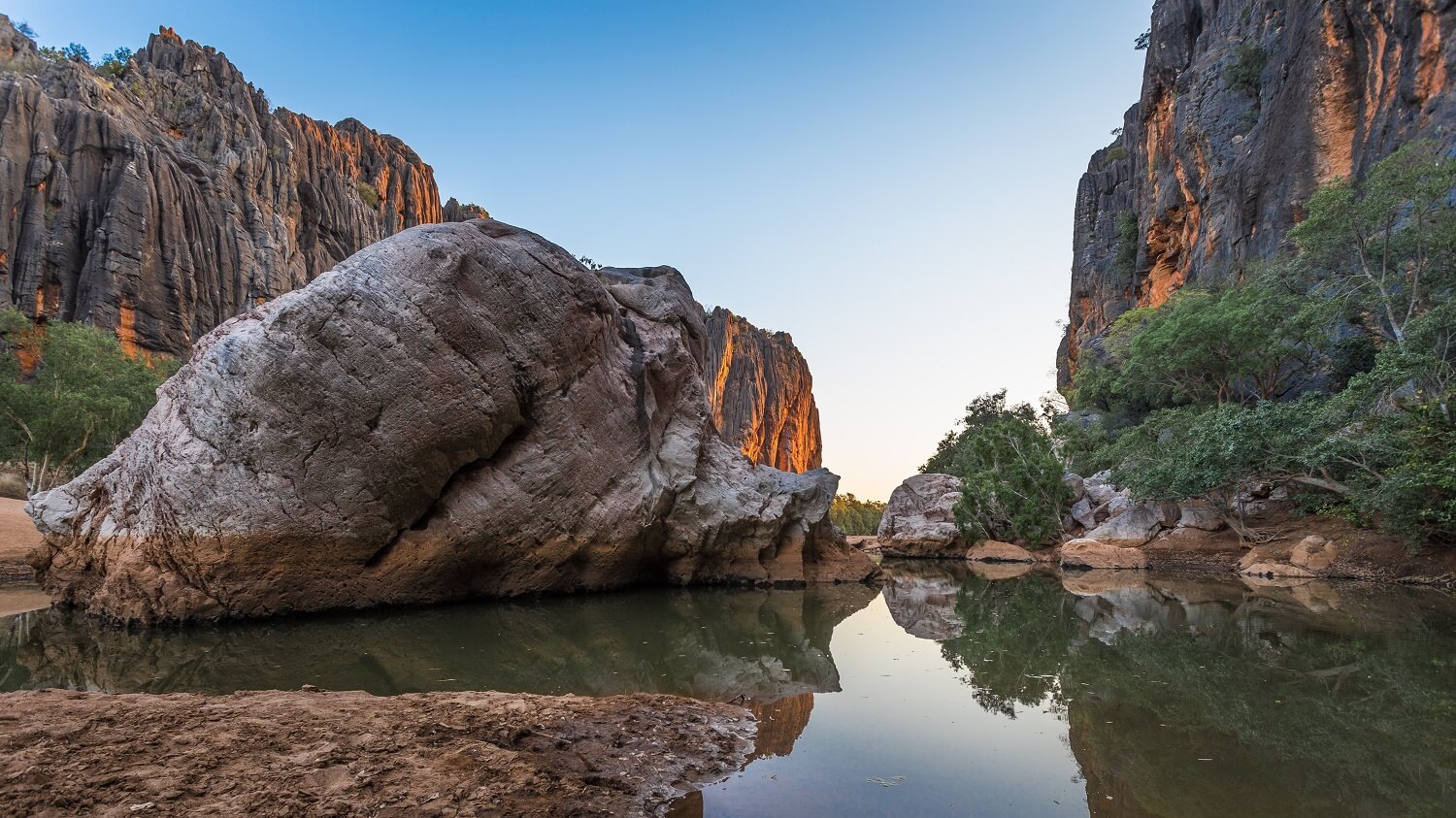 This is one of the most beautiful gorges in the Kimberley. The waterfalls cascade down the perfectly U-shaped cliffs, into a deep pool, a great place for swimming. The large flat rocks along the side are a great spot to sit, sun bathe and picnic. 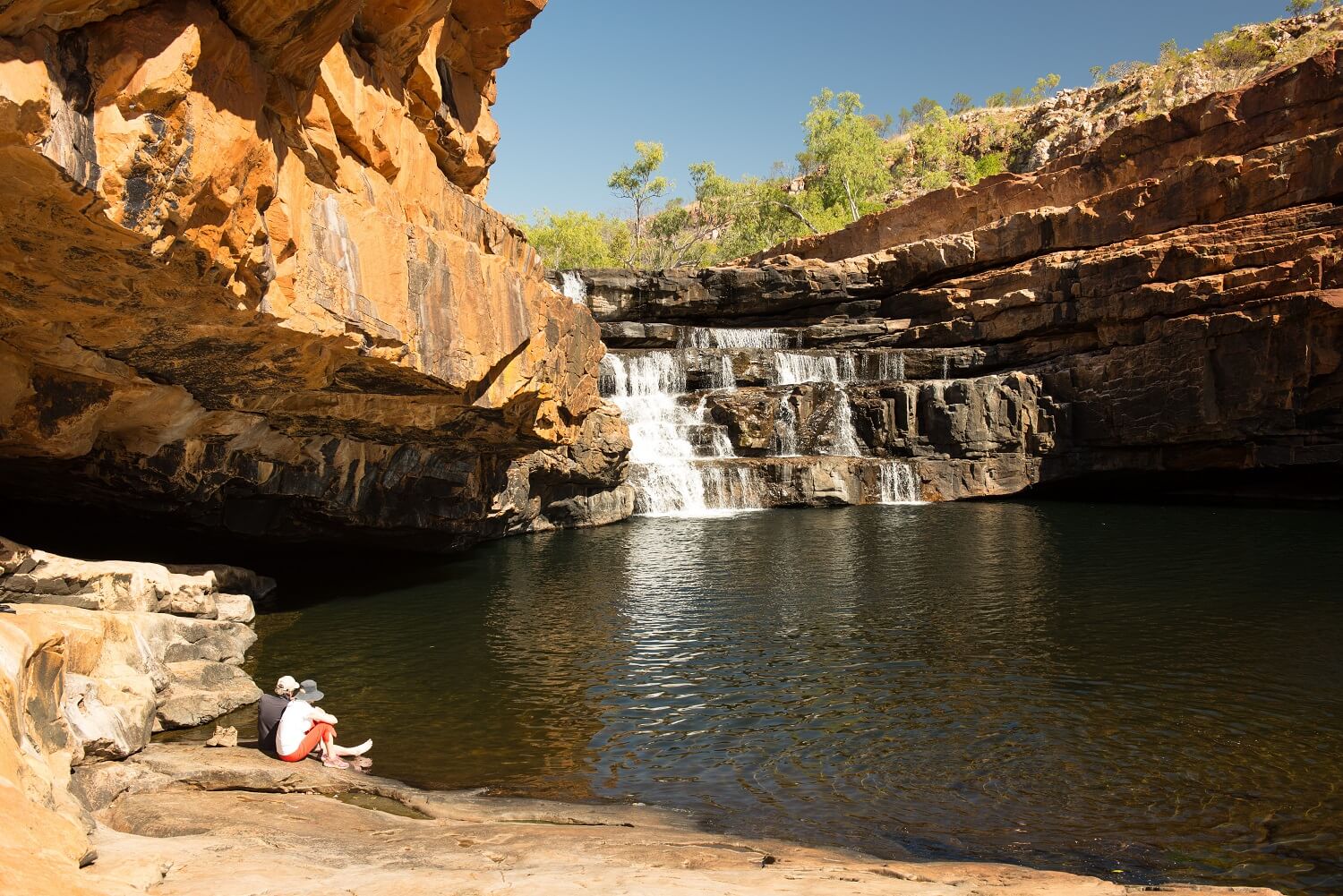 Covering 358,274 ha (885,311 acres) of the Pentecost sub-region the property incorporates sections of the impressive King Leopold Ranges and much of the upper catchment of the Fitzroy River. Aboriginal people have occupied this land for thousands of years and a small indigenous community still lives within Mornington. From 1901 Mornington was managed primarily for cattle grazing but in 2001 it was acquired by the Australian Wildlife Conservancy (AWC) and the property has been modified to promote conservation of biodiversity.

The Mornington landscape is immensely beautiful. The Baulk Face Range dominates the central part and Fitzroy Bluff stands majestically in the south. There are several permanent rivers flowing through the vast savanna plains to drain into the Fitzroy River.

These waterways sometimes dissect the terrain for several kilometres to form spectacular vertical-walled gorges such as Dimond Gorge and Sir John Gorge. The dominant habitat of Mornington is tropical savannah; the grasslands are lightly sprinkled with stands of low eucalypts, Kimberley Bauhinia, Acacias, Boabs and native kapok.

The diversity of habitats on Mornington supports an extraordinary assemblage of wildlife. 202 species of birds, 33 species of mammals, 76 species of reptiles and 22 species of frog are known to occur on the property. 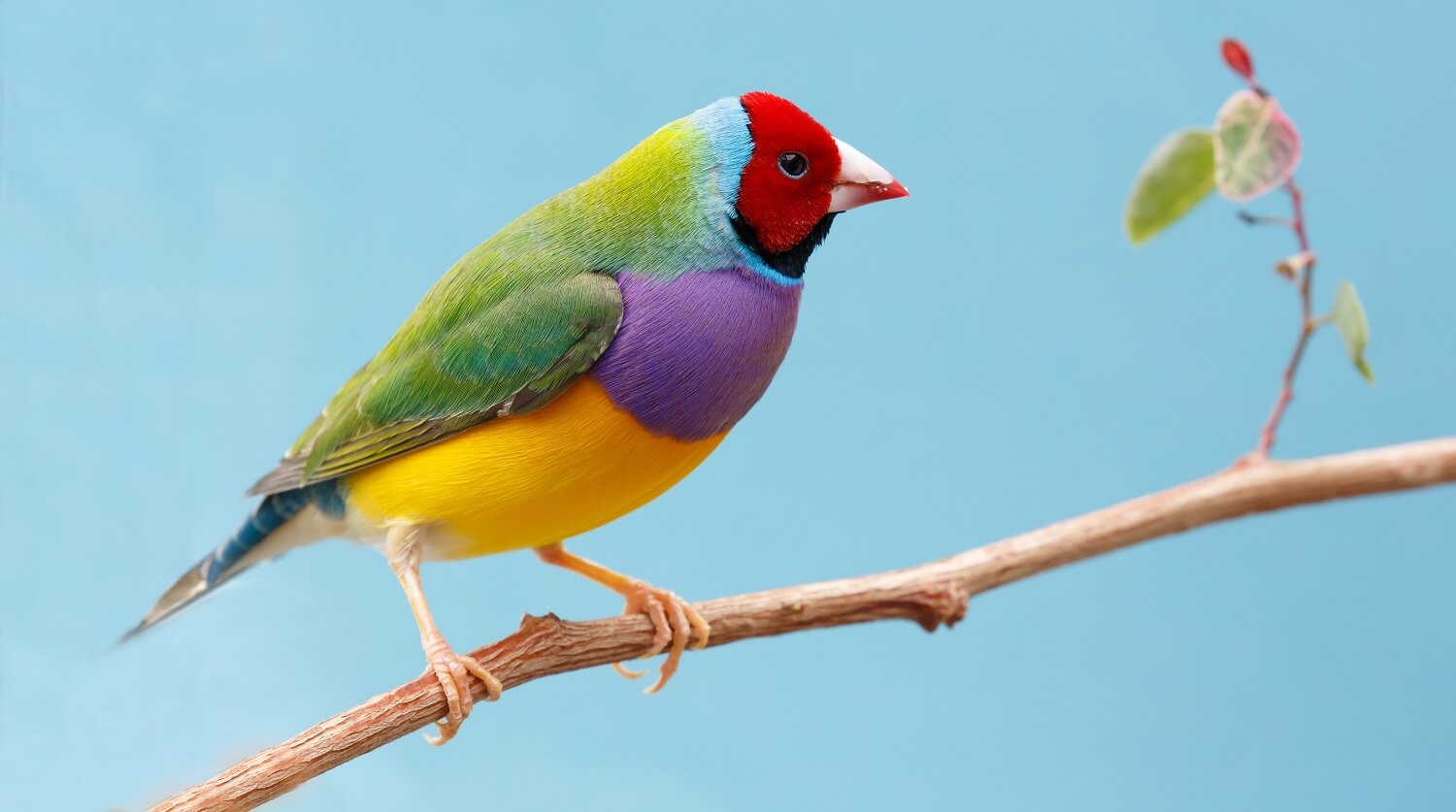 Not far from the Gibb River road you can wander through the lush vegetation to the natural spring waters of Zebedee Springs, where gentle cascades and water holes are surrounded by palm forest. 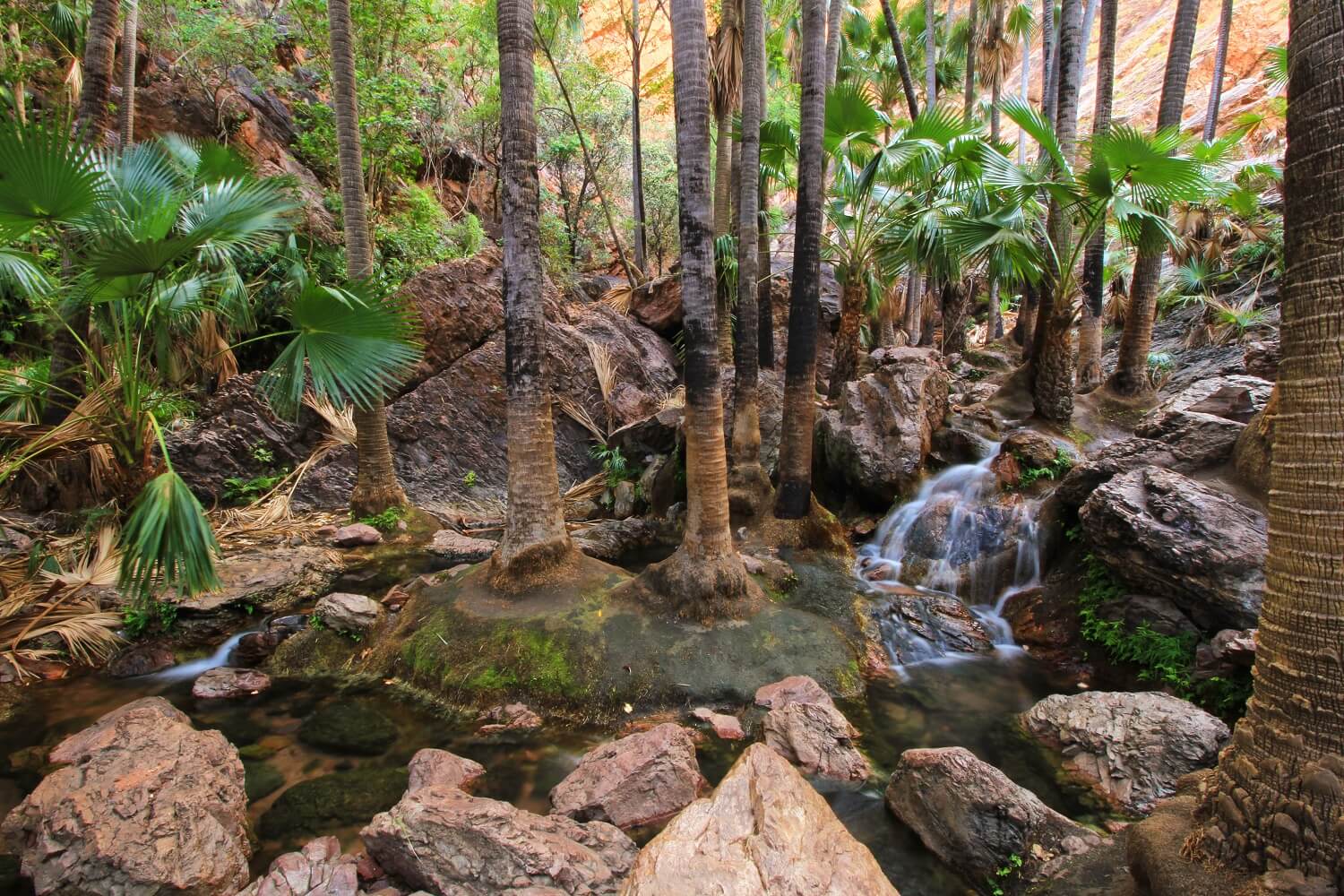 Nestled in the sweep of the Ord River Valley is the newly listed World Heritage Purnululu National Park. Although a mere 250 km south of Kununurra, it was only discovered by the outside world in the early 1980s. The Bungle Bungle sandstone massif dates back some 380 million years, and the striking beehive domes have protected Aboriginal rock art, sacred sites and rare vegetation for centuries. Within the spectacular massif lie Cathedral and Piccaninny Gorge. A visit to either requires a stroll along the ancient creek bed of Piccaninny, amidst the towering striped domes. As you venture deeper into the national park the narrow cleft of Echidna Chasm, and Mini Palms are accessible with a little more effort. The beauty of the park is striking. The Bungle Bungle represents the grandest of the distinctive Kimberley formations. 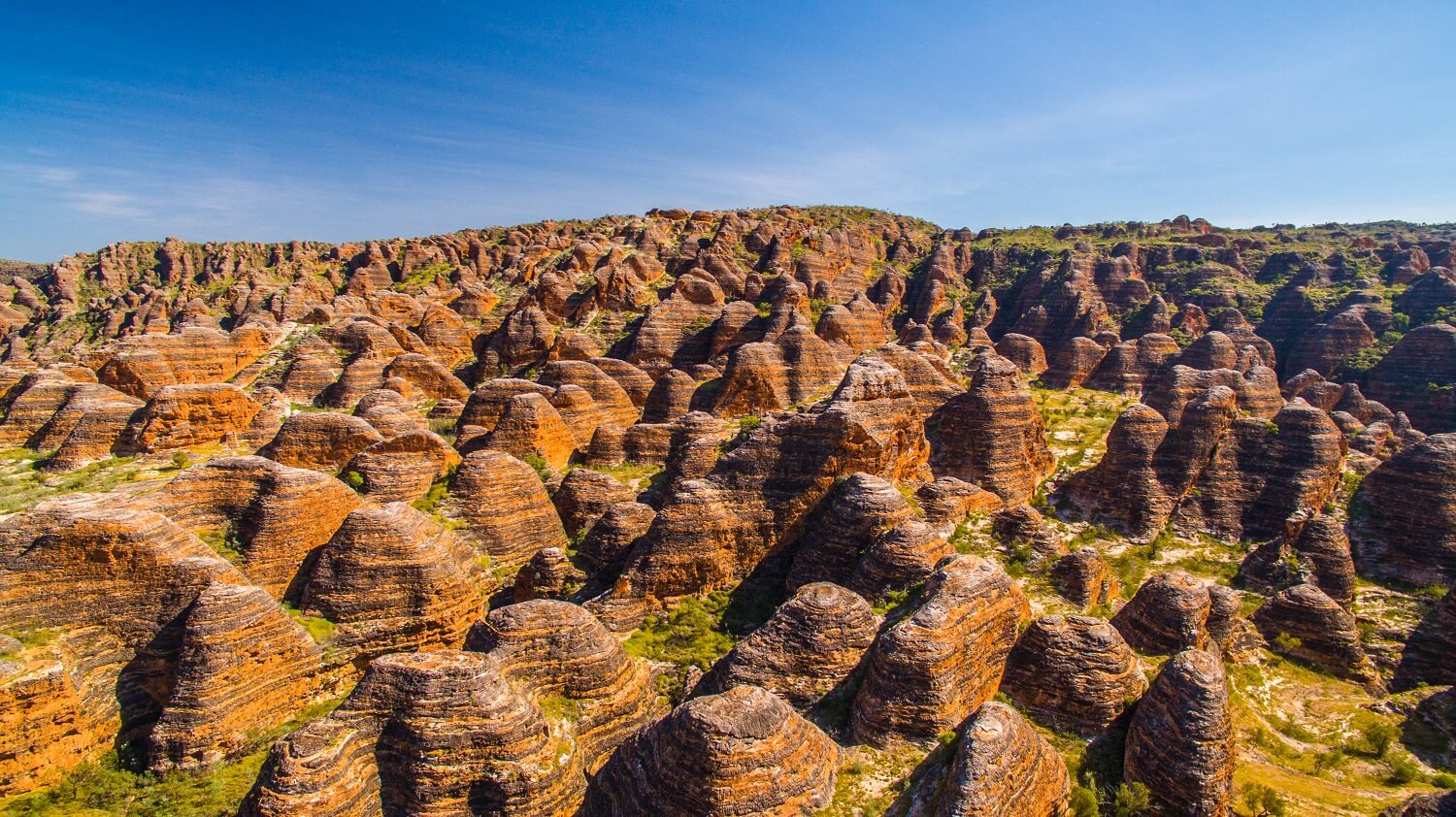 How to see the Gibb river Road in style

The Gibb River road is best seen on a guided private 4×4 journey (allow roughly 9 days) or air safari staying at luxurious properties such as El Questro Homestead, or the comfortable tented camp of Mornington Wilderness Camp. Talk to Alquemie for the best way to organise your Gibb River road journey.